“Andrew share farms 360 cows & has been using the Pelvic Lift & RiserTank for 4 years. Andrew said – the RiserTank takes the hit & miss out of the rehabilitating downer cows. For Andrew cows are his biggest asset & with a downer cow recovery rate of 90% & cows being valued at $2,000 each, the RiserTank has been a really good investment. Andrew highlighted the key to achieving the best results is to get cows into the RiserTank as soon as possible. The buoyancy of water gives the cows the confidence to stand. He said that although not recommended, he places cows in the RiserTank for two 8 hour sessions per day with a 4 hour rest between sessions. He effectively sets & forgets. During the rest period he drains the warm water until it just covers the sitting cow. Generally it takes between 1 & 3 days for a cow to recover. He said you know when they are recovering as you need less & less water for the cow to stand at the start of each session.”

“Xavier Parkinson milks 900 cows in his own right & has formed an agreement with his brothers were they have created a calving complex where they calve down approximately 2000 cows from 3 separate farming operations. Xavier highlighted the RiserTank has doubled their downer cow recovery rate & has helped them in developing a standard procedure to better manage downer cows. The use of the RiserTank has significantly saved on labour with Xavier saying they cannot devote the time to conventionally lift cows regularly. He also highlighted the decision on whether to persist in rehabilitating a cow is made much easier when the RiserTank is used. In relation to the use of the Pelvic Lift he said the addition of the pelvic support definitely supported the cow better.”

“The best thing about the RiserTank is that you know straight away whether the cow is going to get going or not – that’s a big saving to us”.

“Coomboona Dairy is a large dairy & stud Holstein operation owned by Alex Arena. James Turvey, the farm manager, indicated he has achieved a downer cow recovery rate of 80% with the RiserTank, with the recovered cows having an effective & profitable lactation. Coomboona Dairy use the RiserTank in-conjunction with the Pelvic Lift. Generally the cows stand in the RiserTank for 3 hour sessions with these likely to increase in length in the future. James also said the RiserTank is easy to clean & drain with a good sized drain hole. It is kinder on cows than continually lifting – the cows can settle in & eat. The rear door allows cows to simply walk out of the RiserTank after they have recovered. The strategy at Coomboona Dairy is to identify & treat downer cows as soon as possible – according to James this maximises the chance of a full recovery.”

How it all works 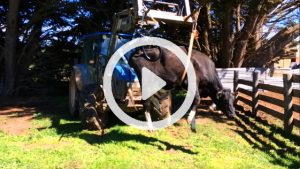